Dr. Khuong “Van” Nguyen Honor His Past by Providing for the Future 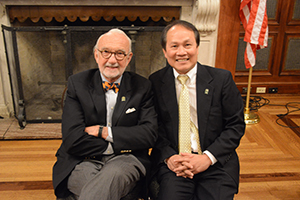 Fate, destiny, and God’s will are words Dr. Khuong Van Nguyen, MD, MS, MSME, FACS, uses to describe his life and the trajectory of his career.

When he arrived with his family in the United States from Vietnam at the age of 17, the fifth of nine children, he could never have imagined the impact he would have on the lives of others. Now, at the age of 57, Dr. Nguyen is honoring those who have had an impact on his life through a bequest in his will to benefit student scholarship in the College of Medicine at The University of Tennessee Health Science Center (UTHSC).

Medical school had been his dream as a young man, but Dr. Nguyen was concerned the language barrier would be too great. He improved his English through reading and working in a restaurant kitchen.

Despite being considered an “older” student at 29, and with a wife and two young children, he pursued his dream to attend medical school. Dr. Nguyen studied for and passed the MCAT in just two weeks. Medical school was not easy for him; the terminology and pace of study were different from that needed to obtain his bachelor’s from Michigan State University and two master’s degrees from the University of Michigan, all in chemical engineering. He persevered, graduating from the UTHSC College of Medicine in 1992.

Arriving at the current place in his career has not come without difficulties. Just two years into his six-year residency program he was in a car accident that left him in ICU at The Med (now Regional One) for ten days. Fully unconscious for two days and suffering damage to his liver and ribs, a heart concussion and, a fractured right tibia, he recalls the tremendous support he received from his fellow residents and attending physicians. To ensure he was mentally, as well as physically, able to continue his residency, Dr. Nguyen received a psychiatric evaluation. He passed and recalls performing surgery at LeBonheur Children’s Medical Center while on crutches.

Unfortunately, the leg did not heal and another surgery was necessary. With the support of attending physicians and his fellow residents from UTHSC, he was encouraged to continue working—focusing on research rather than direct patient care until he was fully healed.

Dr. Nguyen and his wife Lihn have established a scholarship that provides residents with a medical education stipend and an otolaryngology research award for residents in the UTHSC College of Medicine at the University of Tennessee Health Science Center (UTHSC). To ensure this scholarship exists in perpetuity, the Nguyens have endowed their gift through a bequest in their will. They have also endowed a second scholarship in honor of Dr. Nguyen’s parents, whom he considers critical in his life success.

Of his membership in the Hershel P. Wall Legacy Society, Dr. Nguyen is humbled. “Dr. Wall’s demeanor as a physician and his breadth of knowledge as a teacher had an incredible impact on my practice of medicine. To be associated with him and the Legacy Society is truly an honor.”

Through all of his experiences, Dr. Nguyen has not forgotten where it all began. That is why he chose to remember UTHSC through a bequest in his will. He wants future generations to feel the UTHSC impact too.